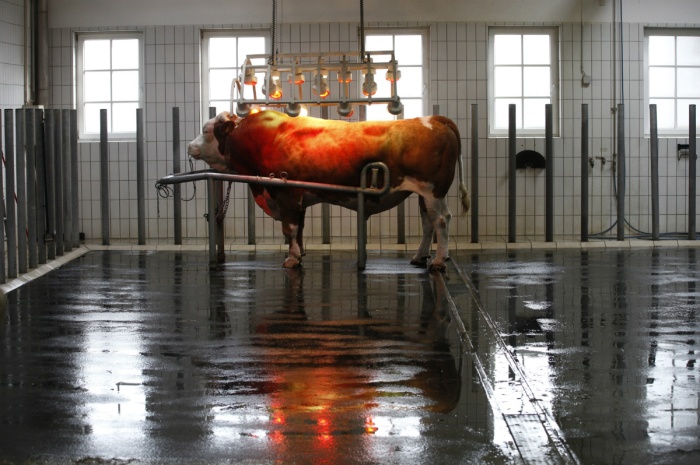 Let’s pause this Father’s Day and remember the Fathers of the Animal Kingdom too! For let’s face it, it takes two, a male and female, to reproduce and have babies. Whether in animal agriculture or the natural wild, Mothers cannot do it alone. So be sure to celebrate these Animal Dads!
Face it, at a minimum, even in industrial animal agriculture, the Mothers need a male sperm donor. Or, as in the case of the Seahorse, it is just the opposite!
https://youtu.be/MsHCqrrU-Gk
In many Animal species, the male is willing and looks after his family (see Animals Australia’s top 5 animal fathers in 2015). In many situations where the human Animal has intervened, however, like with factory farming, the Fathers of our food have never even seen a female of their own species nor had the opportunity to experience what family is.
“When it comes to turkeys, they have been bred to have such large breasts that they cannot even mount and mate on their own. A method of artificial insemination is their sole means of reproduction. Breeding toms (male turkeys) are kept in the dark for most of their lives and milked for their semen once or twice a week.”
liberationbc.org/issuescat/factory-farming/
In factory farming, there are many males who will never even have the opportunity to grow up, precisely because they are male. Those who are kept to be so-called “Fathers,” once their sperm count declines, are sent to slaughter.
“Americans alone eat the corpses of about 10 billion land animals every year—which is neither hyperbole nor sentimentality; it’s just true. Every one of those animals was made of flesh, blood, and bone—just like us. Every one had eyes, ears, nostrils, a mouth and limbs, just like we do. They have the same five physiological senses that we do. And as Dr. Temple Grandin notes, they “have the same core feelings people do”. And, of course, every one of those animals started with a mother and a father, just like we did.”
https://www.youtube.com/watch?v=U0yPJmJ6v0M
When it comes to Animal Awareness, we hear a lot about cruelty as it affect the Mothers; however, we do not hear much on the Father’s side of the story. So let us give pause and say thank you to all the Animal Fathers out there and hold them in our hearts too as we celebrate with our own Fathers.
I invite us all to celebrate Fathers Day by leaving all Animals, and their milk, cheese, and eggs too, off our plates. We can honor the Golden Rule by considering this: Would we want our own Father to be treated as agriculture treats them?
Rev Ahowan ICrow of Apithan Ministries
on behalf of Compassion For All Living Beings CC, a member of the United Religions Initiative Multi-Region
Below are few more links with more information about animal agriculture practices and how they brutalize the Animal Fathers.
https://www.huffingtonpost.com/sonia-faruqi/factory-farms-of-the-futu_1_b_4454910.html
http://www.mercyforanimals.org/sex-and-violence-in-the-meat-industry
http://thinkdifferentlyaboutsheep.weebly.com/factory-farming-turkeys.html
http://www.all-creatures.org/articles/ar-insideaturkey.html