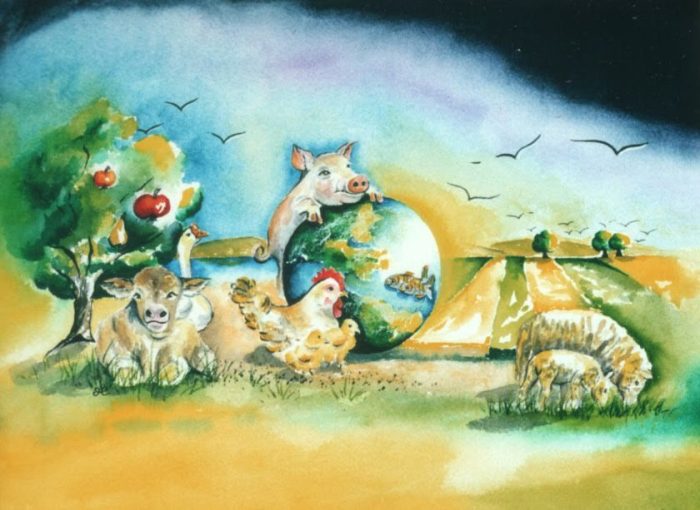 I can give you the definition according to Wikipedia…

I can also explain what the difference is between Vegan and Vegetarian…and be sure to take the time read here as well.

However, in honor of World Vegan Day, let me share with you the reasons I feel so passionate about ‘it ‘ (veganism and animals) in my heart and what lead my non-profit to join United Religions Initiative years back as I was becoming an Ordained Animal Chaplain and Humane Minister.

I have since joined a passionate group of “Animal Compassionistas” called the Compassion For All Living Beings CC and we are inviting others to join us!

Here is my deeper reasoning for being Vegan (besides loving animals, my health, and our Mother Earth).

The Golden Rule is present in every major religion and most cultures, each expressing it in their own words. Basically, it is, “Do unto others as you would have done unto you.” And each of tradition has a reference to include all living beings.

So, when we put the Golden Rule and animal together with those things we say we all want: peace, freedom, equality, dignity, respect… at least we say we do…we must, therefore, want all of these for everyone.

What we want is a world that works for everyone, and for the Mother Earth to continue to support the lives of our children.

So, let’s take into account all that “being Vegan” is. It is a living practice of the Golden Rule, including the ‘animal tenets’ of all the major religions and cultures. It is covered in the United Nations Sustainable Development Goals, part of the URI PPP’s and definitely covers ALL of life… including, but not limited to: humans, soil, water, women, men, religions, hunger, cultures, children, the environment, and Mother Earth herself, by giving the very freedom, peace, equality, dignity, and respect to ALL living beings in a way that is sustainable for Mother Earth and all of us who reside.

Let’s face it…being Vegan adheres to all of it, even in the absence of religion, culture or a national boundary. It is a global ‘thing.’ It is about opening one’s heart to the realization of “What we give or do to any animal, human or not, we get it back in return.” And today’s world is absolutely demonstrative of how many of us have not been living with “e” for empathy towards animals, (knowingly or unknowingly) which is why the United Nations itself is calling for us all to switch to a plant-based diet or in other words to be ‘Vegan‘.

So, for me this term we use, ‘Vegan,’ incorporates so much more to me than the food we eat, the clothes we wear, and the products we use. For me, it is the Golden Rule “Do unto others as you would have done unto you” practiced with all living beings, including human Animals.

In practice, veganism has no real need for religious affinity… it is a human ‘thing, ‘ no more like a humane ‘thing.’ allowing the ‘e’ to be for empathy.

Being Vegan for me is a basic philosophy for treating all life with equality. When we teach our children that we eat these animals, and we wear these animals, but we pamper these other animals, it’s undeniable that we are teaching discrimination. Just like the undeniable connection science has proven when a child is abusive to an animal they will soon be abusive to other humans.

So, in honor of ALL these, and especially in honor of World Vegan Day, Apithan Ministries has taken a public stand with joining the “Prevent Year Zero Declaration.”

I hope something ‘vegan’ gets stirred in your heart, may you eat Vegan along with the Parliament of World Religions this November 1st and let us all unite to include ALL living beings, every day, with every meal, with every decision.

Join the Prevent Year Zero Declaration, here is a Vegan Starter Kit, and here is a beginning Environmental Toolkit, AND be sure to share your Declaration and experiences of the kits with Compassion for All Living Beings CC!

From my heart to your heart,

May we have Peace with all Animals,

On behalf of Compassion for All Living Beings CC, a cooperation circle of the URI Multi-Region

“The motivation behind vegan living is the universal spiritual principle of compassion that has been articulated both secularly and through the world’s religious traditions; the difference lies in veganism’s insistence that this compassion be actually practiced. The words of Donald Watson, who created the term “vegan” in 1944, reveal this practical orientation and it bears repeating:

“Veganism denotes a philosophy and way of living which seeks to exclude, as far as is possible and practical, all forms of exploitation of, and cruelty to, animals for food, clothing, or any other purpose; and by extension promotes the development and use of animal-free alternatives for the benefit of humans, animals, and the environment.”